For Roll 33 I wanted to go on a pinhole adventure so I went to the Witches Castle in Portland, Oregon. I posted this originally on Pinhole Obscura.

The Witches Castle is located in Forest Park (Portland, OR). There are a host of rumors about this place. I was curious about how the place came to be known as “Witches Castle” so I did some research.

Way back in the olden days  there was a family living on the property by the name of Balch (the creek that runs through here is named after this family). When Danford Balch laid claim to the area he hired a transient worker to help him clear a spot for his house (Mortimer Stump was his name).  Stump fell in love with and married Balch’s 15 year old daughter.  Things got ugly. Balch murdered his son-in-law, claiming he was bewitched by his wife to do so. He eventually was hanged for his crime. And now this place is haunted by Balch.

So I decided to hike up here alone, which was fun. I also sat for several very long exposures. Also fun. I didn’t see any ghosts. Or witches.

About the structure: I’ve read that this was a restroom that fell into ruin after a storm in the 1960s. The Forest Service  decided to not rebuild it and so they let it go. 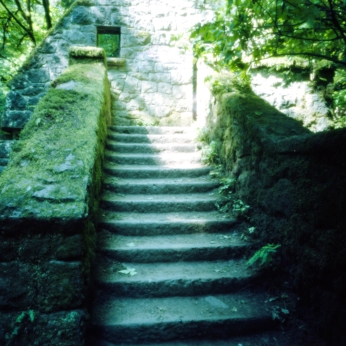 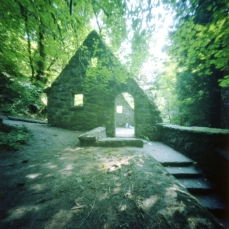 2 thoughts on “Roll 33 – The Witches Castle in Portland, Oregon”