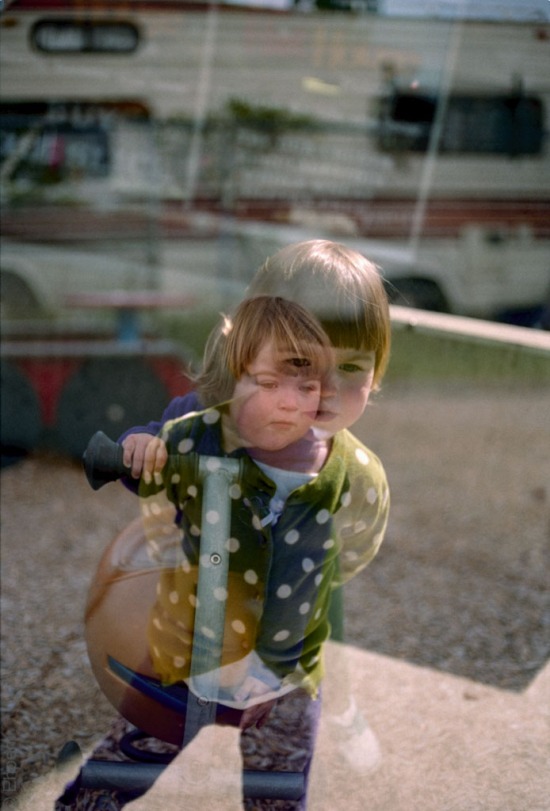 Week 21 is brought to you through a Canon Elan 7N, 50/1.4 lens, Fuji Superia 200 and a large dose of operator error. My granddaughter is actually no trouble at all, so doubles of her are just fine. The title is nostalgic of my childhood in the 1960s – there was a cartoon by this name, or a character, or something (and there have been many since which makes an internet search more complicated than I have patience for). The images in these double exposures were made at least two weeks apart. I have already posted one from this roll on my blog here, and today I post another (my favourite) at the same time as this post is published. If you want to see it, then click on this link.

I find the above image to be quite extraordinary considering it was unintentional and also taken at least two weeks apart. The same goes for some of the others, pure luck combined perhaps with a narrow subject matter framed in similar ways over and over again! My grandchild shooting habits are exposed. These habits are likely to change though as in a few days my granddaughter and her family move out of town – the 3 hour drive will mean we see much less of her, and I will have little time alone with her babysitting as I have been doing a lot the past few months.

The story behind how these came about starts with me shooting some of this roll of film in Victoria. I then flew on a work trip to Haida Gwaii with the camera. I packed it and a Canon DSLR in an ancient pelican case I have had since 1982. I forgot to release the valve on the case so on arrival it was bowed in at the sides and took quite a long time to vent enough to open the lid. I also found that the camera was giving me a message about a film winding error and there was no way to correct it except pop the back a touch and then rewind the film. Since it was then fully rewound and I had no way of pulling the leader out, I loaded another roll and shot about 28 frames prior to coming home. When I got home the camera was displaying the same symbol so I decided that there was an error being caused by pressure changes while flying.

I figured I had shot about 5 images on this roll of film, so with the leader pulled out I put it back in, advanced it to about frame 8 and continued shooting. When I had it processed I found that actually I had exposed all of the film the first time around (how is that for keeping track?) and thus I had these double exposures.  The other roll of film, which will show up here as my Roll 22, was slide film and I wanted to put it back in and shoot the last eight frames to get the most out of it (expensive!), However, these results made me reluctant as there were shots on it I did not want to double expose, so I had it processed and it turns out I had shot the whole film too.

Closer examination of the manual revealed the answer – in both cases I had shot the whole roll of film and that was what the symbol I was seeing indicated though it can also mean a winding error which is what I had first found with an internet search while in Haida Gwaii.  I finally had my answer because it was then I remembered that I had been fooling around with the settings on the camera and put it into silent (and slow) rewind mode. It was so quiet that I did not hear the film rewinding for either roll, and had not noticed I was close to the end of both rolls! Even though a bit embarrassing this is a big relief because I thought the camera had a glitch and would be too expensive to fix.

To open a large view of any image in the gallery below, click on it and navigate with the arrows to the others 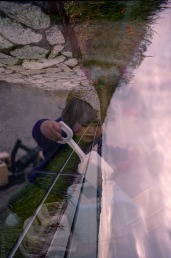 The trail to the beach

Dad and daughter in the park, with spiral road repair 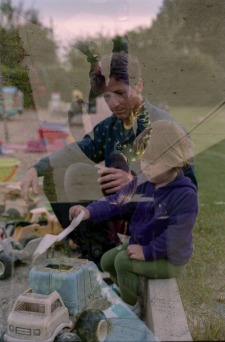 Which way is up?

Off to the warehouse 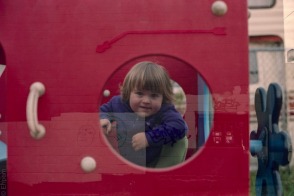 Up the slide stairs with diagonal wall

Dad and kid with my World Wide Pinhole Camera set up.

Dad and daughter with Gonzales Bay