Hey film fans, I’m Henry J. McCracken, and I live in Paris. Thanks to Urban for the invitation to participate in this project. I thought I would write a few lines before I put my finger on the shutter release for the first time in 2016.  See that photograph? The wine represents all the film still in film canisters, and the empty glasses represent the cameras . In 2016, I hope not only to drink the wine, but also to take the photographs :-). 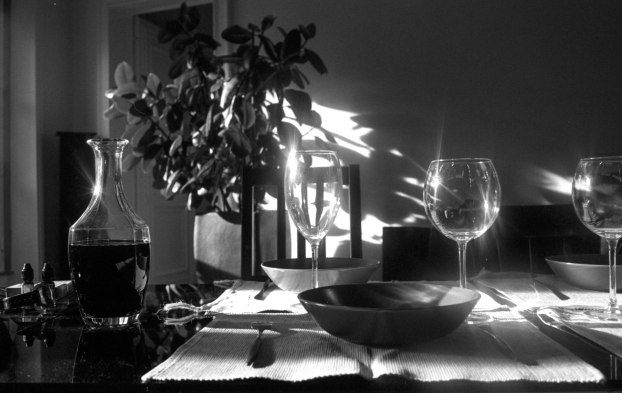 I’m a recent convert to film. I have always taken photographs, but I only started seriously thinking about it about a year and half ago. I soon realised I was spending a lot of time on the computer converting all my digital images to black and white. I thought: well, why not just take all the photographs directly in black and white with a real film camera. What this entailed in terms of effort was a bit frightening, because I like to have control over the process – it meant chemicals in the kitchen, and scanning, because it’s hard to have a real darkroom in a small Parisian apartment. But, last summer I bought some second-hand cameras, eventually a Leica and a 35mm and 50mm lens.  A friend at work has loaned me a nice Rolleiflex 28C and I have also shot a few rolls of medium format, which is wonderful, but not as practical for travelling.  Since my “conversion”, I have shot around and developed 50 rolls, which is a lot of work, but the results are really worth it ! I won’t explain why film is wonderful, that would be a waste of time here, but still:

I’m attracted to the 52 rolls project because I think we have too many choices today, and those choices have not necessarily made us better artists and photographers. It’s enough to consider the enormous technical advances in digital photography over the last decade and then reflect on what this has given us in terms of photographic images. Is it really necessary to have a 53 megapixel detector to make a great image? Most of the iconic images of the 20th century were taken with very modest equipment. Slow lenses, slow film, low resolution. Instead of considering the images to make, we are swamped by technical choices.  So my project for 52 rolls is very simple: take at least one roll of film (probably Tri-X) per week with my 35mm film camera and a 50mm lens.  Ouch ! 50mm is hard for me.  I find it less fun than 35mm, but I have to say, looking back over the first 50 rolls, I can make better photographs with it.  I should be able to scan and develop at least two rolls every two weeks, and post one image from each roll.

I’m fortunate to travel a fair amount for my work,  and I enjoy photographing here in Paris (but no kissing people in cafes, I can assure you), so the project looks feasible. I also relish going to places like Hawaii (in January) and only taking pictures in black and white. I think Hawaii, unlike Paris, probably has not had enough black and white photography!

You can follow my posts here. Best wishes to everyone for 2016, now to take some pictures!