Over the last couple of weeks, we’ve been preparing for, and finally moving house. All in all it went as smoothly as we could have hoped, but it has meant little time for photography. Luckily, the pressure was off as I was ahead of the game and had 23 rolls ‘in the bag’ by week 11.

But the new house has a large garage attached. Better still, the garage has a sink and running water, perfect for a home darkroom. So, while a pinhole exposure isn’t strictly ‘a roll’, that’s what you’re getting this week. It’s time to introduce you to Dorothy.

I have lots of cameras, and while my wife has never told me that I have too many, that day is coming. So in a move that could be seen as a pre-emptive irony, my latest camera is disguised in a shoe box – an item of which there are many more in our house than there are cameras.

Dorothy is a pinhole camera. The most basic camera there is, it has no lens, no film, no battery, no memory card and absolutely no megapixels. To be more accurate, Dorothy is actually 42 pinhole cameras. Inside the shoebox is a piece of brass sheet with a grid of 42 holes, each 0.6mm in diameter. They should have been 0.3, but I broke every size of drill that I tried up until 0.6 so 0.6 is was.

Behind the brass is a piece of foam with cardboard packing material cut into it that I got from a skip at work. This keeps the light coming in through the holes separate until it hits the paper that is held in place with some corner guides made from a Pironi beer box. This camera makes my Holga look like a Leica…

The 0.6mm holes are roughly equivalent to f120. The aging 10″x8″ Ilford Multigrade IV RC Deluxe paper I have is around ISO3. This combination and the overcast conditions meant a 2 minute exposure.

But having seen James’s similar project, I knew that I wanted to reverse the image to get something that was easier for the brain to deal with. That means using photoshop invert the image and to take the bottom right cell and place it in the top left. Hopefully you see what I mean… 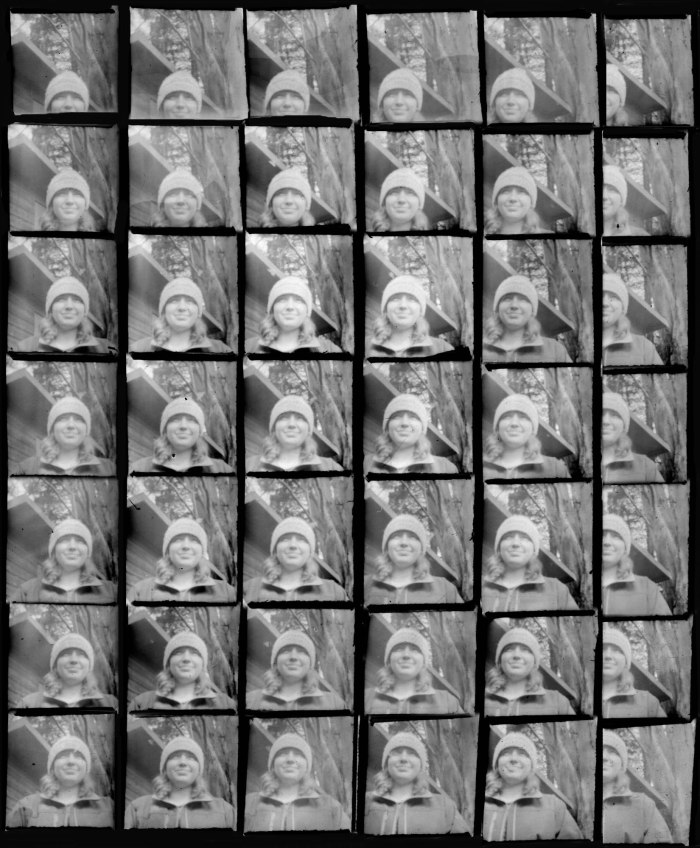 My daughter Ella did a great job of remaining still for 2 minutes, despite her sister and I gooning about around her.

Another shot, taken when the sun came out https://flic.kr/p/EReU9P

If you’re at all interested in this sort of photography, and especially if you’re local to Leicester, you may want to join us at Leicester Lo-Fi Photography.