Some days ago I felt like shooting some medium format in Black and White. In front of the former town hall of Berlin (West) a water-pipe-rupture caused a major traffic break down eight weeks ago, and the roadbuilding continues.  I asked to get access to some rooms of the town hall to take some pictures from a higher point of view.

When I set up the tripod, mounted the lens, metered the light and started to shoot, the magazine of the Hasselblad stopped transporting the film properly and my nice roll of Adox Pan 25 was finished after just one frame. 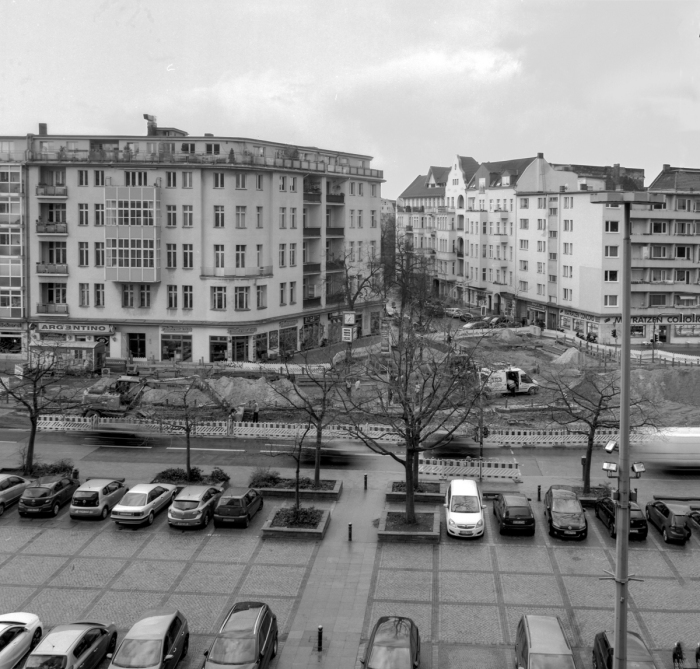 To be honest, I’m not very much into medium format right now. For sunny and warm days, I’ve got me some Reala 100 which I bought for days when I’ll be feeling like celebrating this year. But it’s too early now. There are some rolls of Foma 100 for some frames with the studio strobes, but right now my motivation with the Hasselblad is quite low.

When realizing that the film was finished after just one frame, I switched to a roll of Tri-X. The sky was indifferently grey, the motivation was gone and the pictures are awful. I felt like my soul was seized by the ghosts of Gerd and Hilla Becher (I do not worship their work). After that I switched to indoor shots but I wish I had more time.

I planned to try different things with the view on the roadwork, but what I in fact did was mounting the 17-35 on the Nikon Df and the results convinced me that I don’t need the Hasselblad anymore to document anything with a vast amount of detail. I might even switch to a mirrorless medium format system – if anything. The pictures I like most when shooting with the 500 C/M are personal shots of my family. What I also like is the square format when shooting with the Distagon and the Planar. Shooting with the Hasselblad has a classy feel but my results are not as steady as with my other cameras. I blame the Waist Level Finder for this. It’s nice, but maybe not for me anymore. I would miss the lenses though.

The result is a picturesque sight: A wet roll with Adox Pan 25 and only one shot on the entire pink film. To avoid showing digital material here I better give the link to the photograph (taken with a 55/3.5 non-Ai).