Since this project is entitled 52 ROLLS and not 52 WEEKS (although I’ve been doing my utmost to shoot one roll or pack every week), and since I’ve been in a photo funk since returning home, I decided to add some more film from Iceland to fill week 24 – using the pirates’ creed wherein regulations are generally more like guidelines than actual rules.

So last time I posted photos of the serenely beautiful Flatey Island. The town of Stykkisholmur, whence the ferry departs, is also quite lovely. Although billed in some books as overly touristy I didn’t find that to be the case, except for the clearly inflated prices at local eateries. However the food was so good I didn’t care. There are number of very interesting old buildings, one of which is a fascinating museum called the “Norwegian House” because it was built by a sea captain out of ….wait for it….Norwegian Wood. My visit there caused the song to stick in my head for days, so lucky it’s one of my faves. There was also a little hill on the far side of the harbor which you could climb to look out over the fjord, or back at the town. 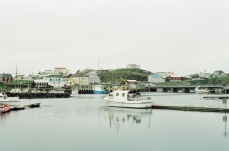 On my way back to the hotel I ran across this charming scene – striping the pedestrian crossing, with a template, with a hand roller, one stripe at a time. And a supervisor for good measure. That’s how they do it in Stykkisholmur.

On the way back to the Ring Road back to Reykjavik I encountered some beautiful scenery which I unfortunately only have digital photos of (gotta cheat some time). However the return trip afforded me the chance to drive around Hvalfjordur. This large fjord is not far north of Reykjavik and was used during WWII by the allies to hide their ships from marauding German subs because it was very deep and easily defended. You can now cross from one side to the other through a very long tunnel that actually runs under the fjord. I did this on the way out of town and it kind of freaked me out. The end result is the road around the fjord is nearly empty as busy city dwellers take the tunnel to get to their weekend homes or outdoor activities.

One of my favorite things about this drive was the random waterfalls everywhere. Of course water that’s not the ocean is a rarity in my part of the world. You can still see some of the abandoned military fortifications and there are signs explaining what went on. Maddeningly, as usual, there was no warning of the upcoming turnouts and only the lack of traffic saved me as I slammed on the brakes.

The dreaded light leak is really starting to show itself here. Anyway, back to Reykjavik for a final night. The little square in the center of the tourist area  was just like any similar spot at home – kids skateboarding, homeless guys hanging out and asking to try the kids’ board and falling on their asses, and twenty to thirty somethings who should really have jobs showing off their skating “skills”. 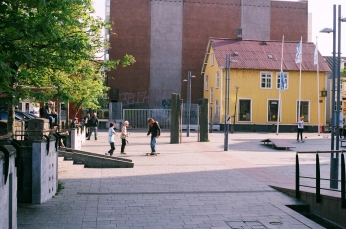 So…. as the sun continues not to set, we bid a fond farewell to Iceland and hope for a trip with no light leaks next time. Everything shot on Nikon FE with 35-135 mm or 50 mm Nikkor on Agfa Vista 200 pushed 1 stop.