This was the week I was supposed to be in Baltimore. I imagined I would be shooting gritty street photography over there in Tri-X push-processed to 1600. In fact, no: there was another more important meeting at ESTEC, the European Space Technology Centre in Noordwijk, Holland, and I had no choice but to attend. Photographically speaking this was lucky in any case, as I was shooting test rolls of TMAX-400 this week and it is much too fine-grained for Baltimore :-).

Noordwijk is on the North Sea. There is a medieval town there,  but it is further back from the water than ESTEC or the beachfront houses and hotels which date from the middle of the 20th century. There are long flat sandy dunes and lots of wind, not unlike the coastlines in Ireland.  The hotels near the beachfront where most visitors to Noordwijk and ESTEC stay are perfectly comfortable, but at night the town is empty. There are no people promenading around the boardwalk late into the night. However it turns out that the University town of Leiden is only a short bus ride away, so I stayed there. Leiden is a pleasant place, and the nights I was there it was unseasonably warm, and people were outside on the terraces and cafes and standing having a drink in the street, which I have never seen before there.

So I had at least three places to take photographs of, if could find the time. On the first day of our meeting, I got up very early and stopped off at the beach. And at the same time on the way back I almost got lost in the sand dunes and missed the start of my meeting . Here are three photographs of the beach at Noordwijk, one in the evening and two in the morning. (The wide-angle shot on the top left was made with the little point-and-shoot my friend loaned me with his Leica, on expired TMAX-100). Yes, it looks nice  – but on the black-and-white photographs you can’t see that the real colour of the water is a muddy grey :-).  And folks are very well wrapped up. 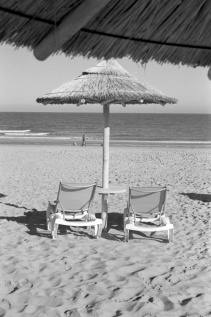 In the evening there were many people in the streets of Leiden, here are a few photographs I took while walking around. While I was taking these photographs I just thinking how much easier it is to do “52rolls” in the summer when it doesn’t get dark at 6pm ! 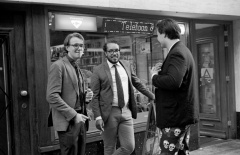 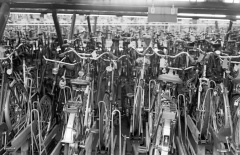 And yes of course there was a voyage to … well, there were no available rooms at ESTEC, so our meeting was in something called ‘space expo’. Our talks were interrupted by the sounds of rocket simulators blasting off. Opening the door to the expo one could see things like this: 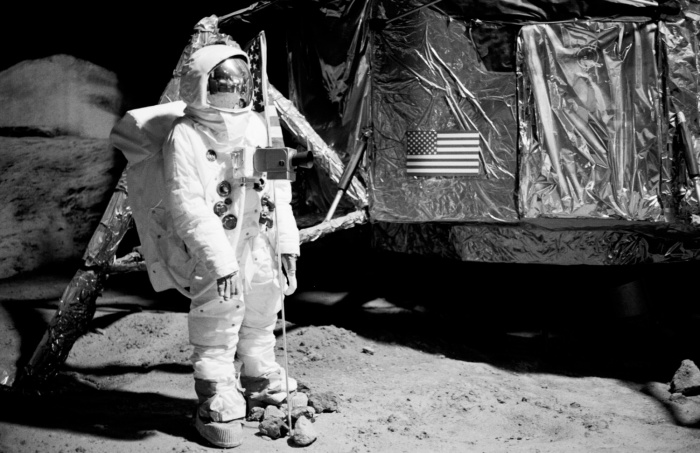 Today I know something that I didn’t know before: that camera which Buzz has is a Hasselblad!

On the Friday morning we all woke up to the referendum result. Standing outside the ESTEC main building and watching the fluttering flags I wondered, that red white and blue one which looks a bit like a cross, should we take it down now?

That’s it ! Next week, at the Observatoire, and some medium-format wanderings around town.

Technical details: This week I have been trying out some TMAX-400 (I bought five rolls). It has been developed in D76 1+1 for 10mins25. Actually it not so bad, nice and smooth and tonal, and the expired rolls of TMAX-100 I developed were also developed in D76. I get the feeling this developer gives nicer results than HC110 for TMAX films,  although I still prefer the grain and sharpness of Tri-X/HP5+.   All photographs here with one exception are taken with an M6 with a 50mm lens.