Today, I discovered an area that I’ve passed by hundreds of times but never realised its history or significance. The Nature Alive nature reserve is the former Swannington coal stocking yard that served the mines around Coalville for 150 years. Coal arrived from the pits in the area, was dragged up the Swannington incline, loaded into wagons here and then taken off to join the national rail network at Leicester.

Many of the rails are still in place but in the 30-odd years since the last mine closed, nature has taken over. Subsidence has caused ponds to form and it has become a pleasant place to visit, albeit with a constant scream of traffic from all directions…

I’ve often explored this sort of post-industrial landscape on my trips to Poland because they are so apparent, there are so many of them, and money hasn’t been available for regeneration. In the UK we do a better (I don’t think that’s the right word) job over covering over such history, but it is still there if you know where to look. 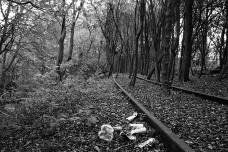 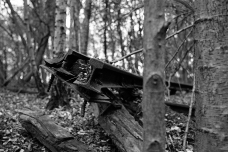 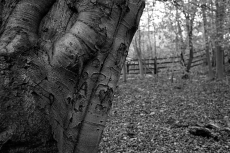 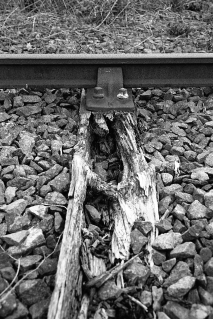 Absentmindedly, I opened the camera before I rewound the film. Luckily, I only ruined 3-4 frames.

Before heading out, I had some EmilyTime and we spent it kicking through leaves and getting her first library card.