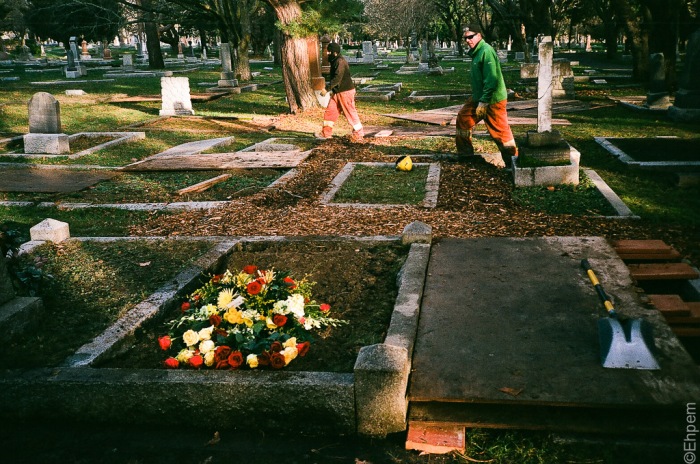 A year and a half ago I published a post Testing a Minolta AF-S. For some inexplicable reason that post has been the most viewed on 52Rolls, with half a dozen views pretty much every day. Why? The camera is not all that special, though I do like the lens quality. So, it’s a mystery to me that I’d love to have cleared up in the comments section below.

I recently found a variant, the Minolta AF-Sv, which is in all but one important aspect the same camera. The v in the name is “voice” and that is because this camera, known as the Talker, talks (yes, that’s right) at you. It has a nearly incomprehensible voice telling you (along with warning lights in the viewfinder) there is no film, that it is too dark (in other words use the flash) and check distance when it thinks the subject is beyond flash range. Even though there is a warning light for being too close, there is no voiced admonishment for that sin, at least not that I could prompt. For my bad habits that warning would be useful. Blessedly there is a switch to turn the voice off on the back of the camera. This switch is the AF-Sv’s one real advantage over the AF-S because it also turns off the warning beeps – something you can’t turn off in the AF-S, even though the warning lights are sufficient. For this switch alone, I would recommend the AF-Sv over the AF-S.

I won’t go into a lot of other technical detail as I really did go overboard on that earlier post, which you can look at via the above link – everything else is the same except the Talker brand on front and top and this version has a red stripe instead of blue on the left side. This camera was missing its unique lens cap, so I used the one from the AF-S as it serves to turn off the camera as well as protect the lens.

As the test strips in that earlier post show, my AF-S under-exposed by at least 3 f-stops (or depending on your tastes, 4 or 5 stops) which meant for some interesting results. I had read other users complain of slight under exposure on their models, so when testing this one I made a few photos at lower ISO settings, just in case. Turns out that this camera under-exposes by about 2 stops. This is far more manageable than 4 or 5 stops as I can use 400ISO film in it at 100ISO. I would strongly suggest that anyone testing one of these cameras to do several tests at lower ISOs as you will likely need to set the camera slower than box speed.

My test subjects were a couple of favourites. One is related to the storm drain, which is being “rehabilitated” with a new lining, including within the boundaries of the Ross Bay Cemetery. A grave had just been filled when I was there – it is very rare to see a fresh grave in this old and nearly full cemetery. The other subject is View Towers, a high rise at the edge of downtown. Fortunately it seems that the drain rehab won’t be impacting the structure that sticks out into Ross Bay and which I have been photographing for years now.

What I like about this camera is the lens. It is sharp and I very much like how it renders colour. I suspect that its 35mm/f2.8 lens is a close relative to those found in the more recent and highly regarded Hi-Matic F cameras. I have a couple of those, which I have not shot yet for a variety or reasons like needing the battery compartment cleaned. I am slowly discovering that I have several cameras that take the same small filter size (40.5mm) including this one, the Hi-Matics and a Lubitel 166U I will be taking possession of in February. Looks like I might need to get a yellow and/or orange filter and run some black and white through all these cameras.

For a compact point and shoot this camera makes excellent photographs and is well worth keeping an eye open for. It should be had quite cheaply – this one was CAN$2.00, including manual and minus lens cap. Find one with a lens cap, you’re unlikely to ever find one separately from a camera.

To see larger versions in the gallery below, click on any image and then navigate with the arrows to see the rest.

All are shot at 400ISO unless they say otherwise

My sick cat, not much longer for the world 😦

By the storm drain

3 thoughts on “Testing a Minolta AF-Sv (aka the “Talker”)”