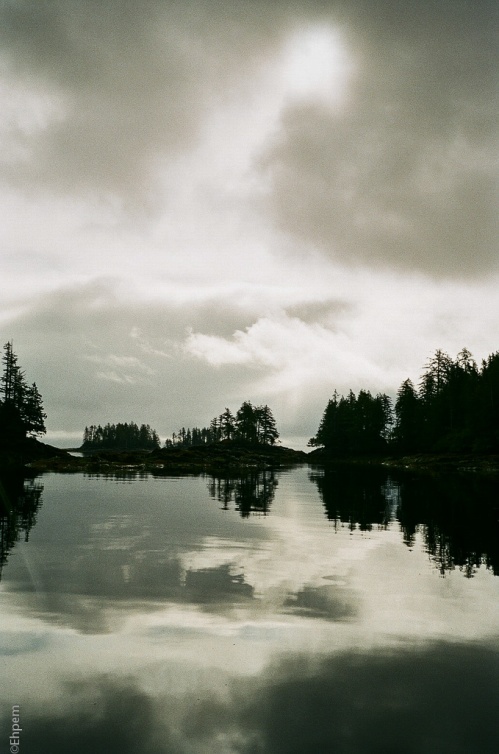 The last day of my time aboard the Passing Cloud we ended up in the anchorage at Rose Harbour, on the north shore of Kunghit Island. This is located on the south side of Houston Stewart Channel which divides Moresby and Kunghit Islands. Rose Harbour (map link) was a whaling station during the last century and a large piece of land remains in a land co-operative outside of the Gwaii Haanas protected areas. Three or four people live there for much of the year and they provide guiding services and accommodation for visitors that fly or boat in. The remains of the whaling station are interesting to look at though we did not do that this trip.

I worked on Ellen Island (Kilgii Gwaay) across Rose Harbour a few times in the last 15 years working on an archaeological excavation. That site has stone, wood and bone preservation of artifacts and waste materials from manufacturing and food preparation as well as a lot of paleoenvironmental data that dates to 10,700 years ago. It is the oldest “wet site” on the northwest coast, by about 4000 years so is highly significant, and very satisfying to work on. 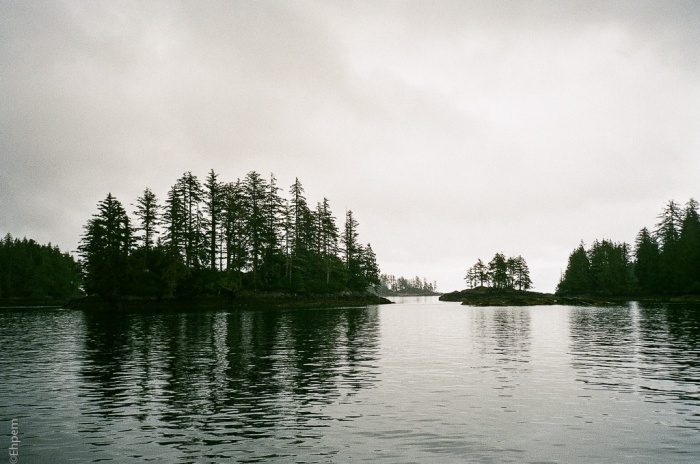 Rose Harbour was totally calm when we anchored here, and we stayed at anchor till mid morning when our float plane arrived to fly us back to Sandspit area. Conditions from the deck of the boat were ideal for photography, but we did visit the Kilgii Gwaay site for an hour or so which was nostalgic for me and interesting for the guests. In the evening at late dusk and after dark we could hear a school of Risso’s dolphins feeding near the boat – an ethereal sound in the dark, but somehow calming.

I only have film photos taken from the Passing Cloud while at anchor on this roll of film, and the very tail end of the roll from when I got home a few days later. Even so, I think my lead photo from this roll is the best that I took on this trip, film or digital, so I guess I saved the best for last.

I am very hopeful of a few more weeks in Haida Gwaii aboard the Passing Cloud next summer, it would be great to do this again.

Other analogue photos from this trip on 52Rolls can be seen with this link.

You can also find more digital Gwaii Haanas images from last summer on my blog (here).

As Roll 40 for this year, reaching 52 by year’s end is feeling more possible than it did a couple of weeks ago when I launched a mad catch up effort.

To see an enlarged version of any image in the gallery below, click on it and then navigate to others with the arrows or with swiping.

Galley, getting dinner ready for serving below in the Salon.

Island in front of Rose Harbour

Looking past islands to east end of Houston Stewart Channel

Deck, made of recycled teak from a 19th Century vessel

Tansy welcomed home by her sisters who want all the stories

One thought on “Rose Harbour Endings”