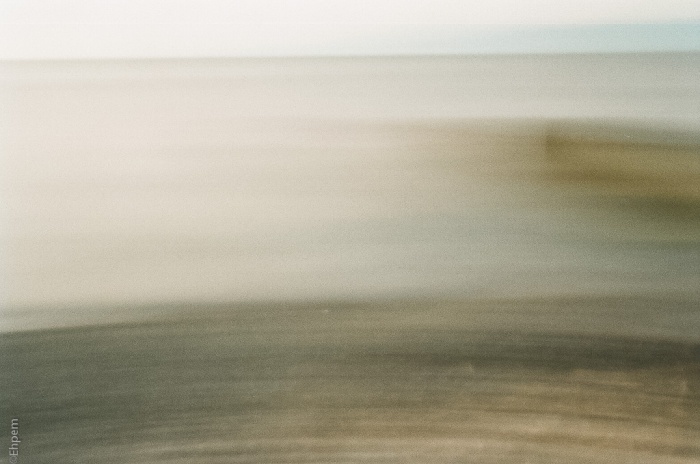 I know, it is absurd to take pinhole photographs with a camera as sophisticated as a Canon EOS3. I tried it anyway. But only after I did the same with a full frame DSLR. Which might be an ad nauseum of the absurd. And if you think that is bad, the icing on the cake is that I paid the ridiculous price of $30 for the pinhole adapter vs only $80 for the camera body. I don’t normally spend $30 on any used film camera equipment (camera bodies included), but wait till a better price comes along. If you thought that was bad go get a drink because I have spare EOS body caps at home, and all the materials and know-how necessary for adapting one for pinholes. I guess I was being lazy. Perhaps I can justify it as the cost of a digital camera accessory?

Beyond any pleasure in the surreal there was a purpose, though perhaps a trivial one. The DSLR was just an elaborate light meter, a tool to facilitate the EOS3 experiment. And using the EOS3 was about testing 35mm film with a pinhole, and at longer exposures. My motivation included seeing if it was possible to get better quality pinhole photos than possible with the pinhole camera I made from a Polaroid microscope adapter (link). They are lovely shots, but even softer than other film pinholes, and the film is no longer available, and thus I might have to adapt it for film some time. I was not sure how much of the quality difference was solely the instant film, and how much due to a slightly elliptical pinhole that I made. I have long been a fan of Todd’s wonderful quality pinhole photographs (check them out here) and attribute his success, at least in part, to ~perfectly formed pinholes, and yearn to make pinhole photos as crisp as his (if I had a 3D printer, I would be there already).

The pinhole I used is a second-hand Korean “Pinhole Obscura Adapter” as it says on the box, or Rising Pinhole Rising Pinhole as it says in a circle around the pinhole plate. The device is essentially a pinhole added into a modified EOS mount body cap. It is said to be an f222 pinhole with an angle of view of 52 +/-2 degrees.

So, what I did was to head out to the storm drain (where else?), set up a heavy tripod, mount the 5Dii, meter the scene with a 50mm/1.4 lens on the camera and do the math to convert to f222 exposures with a handy exposure calculator on my phone, take a couple of shots through glass, then some through the pinhole at different exposures. I also metered through the pinhole, just to see how that compared. I then took what I learned about exposure and applied it to the EOS3 with lens and then pinhole attached, metering with the EOS3 as well, both through glass and the pinhole. I thought about reciprocity failure, though at the speeds I shot there was not much to worry about with Agfa Vista 200. 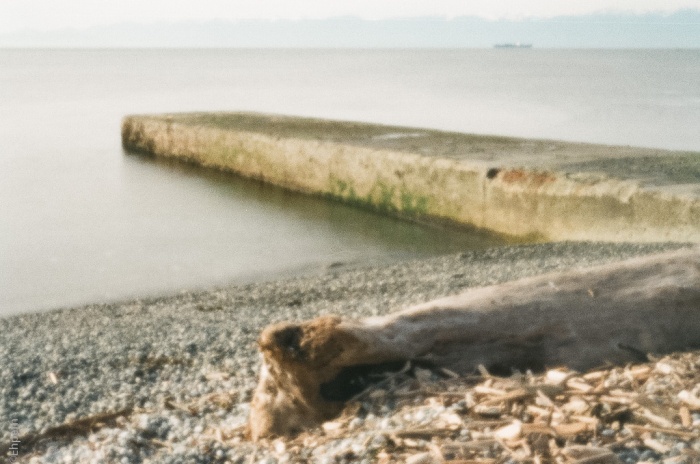 I didn’t shoot the whole roll this way, but I did fool around a bit, including swinging the camera on the tripod during an exposure to try to abstract the storm drain scene. I also made some shots at other angles on the beach, without comparison shots on digital. Later I finished the roll through a lens, probably the EF 50/1.4 though I no longer recall if that was the case. Those images will show up on my blog in the next few days.

So would I do this again? Probably, for fun, especially the motion blur abstracting. I don’t think they are as a clear as is possible for pinhole, so perhaps the pinhole is poorly formed, or the wrong size, which would be disappointing for a commercial product. I can’t get the pinhole flat onto the scanner to measure it, or examine it closely, so can’t be sure about that. If I play with it some more, then it is likely not to be with the DSLR, unless I knew there was no dust on the sensor – man, does the dust ever show up, all nice and sharply in focus. That is one price I pay for putting vintage equipment on the camera, like 40-year-old bellows which are dust magnets and almost impossible to clean. It took quite a bit of work to dust spot the digital image, but this wasn’t necessary for the film shots. Also, I like the film shots better – they have a nice quality to them, brighter and less dingy, that goes better with pinhole than does pinhole with digital. This was a good way of learning a few things, and so I may return to this combination for that reason as well.

The gallery has some of the digital shots for comparison, and the captions have the exposure information. I kept notes in the Filmtrackr software (I reviewed it here, it has since been improved a bit) about the EOS3 bracketing and so on, while the 5Dii kept its own notes. The images, digital and film, are all treated the same way with a very small amount of sharpening (1/3 less for the film than the digital), clarity, a bit more contrast and a small boost for the lights. Sounds like lots of tweaks, but very small ones (more needed for the neutral digital than the film which already has commercial scanning tweaks built in).

8 thoughts on “Pinhole with Canon EOS3”