Week 45 and 46 fell during the wonderful “festival des Troquets”. This was a series of events meant to celebrate the publication a new book from Jacques Yonnet. I already wrote about Yonnet on my blog several years ago. For me, his “Rue des Malefices” is one of the greatest books ever written about Paris. So, it turns out a suitcase full of Yonnet’s writing about bars (a “troquet” in the vernacular) was recently discovered. The best of these were selected to be included in “Troquets de Paris”, which was published a few weeks ago. The editors, in collaboration with bookshops around Paris, hosted a series of events around Yonnet and the other writers in this circle of post-war French writers like Henri Calet and Bob Giraud. These writers were really interested in “vie populaire”, what happens in the bars and cafes of and not necessarily the doings of famous artists and writers.

As part of the festival, each weekend in November a free guided tour in a different part of Paris was organised, and I managed to participate in two of them. They really were wonderful. The audience was very knowledgeable: they were all very highly educated people with a profound knowledge of Paris (some of them of course had been living the in places we visited for all their lives). So you can imagine what a difficult task each week our guide, Jean-Manuel Traimond had to tell these people something new and different that they did not already know. He certainly managed to do this!  (Incidentally, if anyone reading this is looking for a highly qualified Parisian guide, Jean-Manuel is excellent.)

The first tour I participated in  was in Montmartre (which we learned is a corruption of the “hill of martyrs”), and the weather was atrocious. Constant rain, cold, wet dark. My feet were blocks of ice at the end. I took about three photographs. The second was in Mouffetard / Contrescarpe, and despite living not far from there since more than ten years, there were still many things I discovered. Here is Jean-Manuel telling tall stories and in front of Hem’s old apartment: 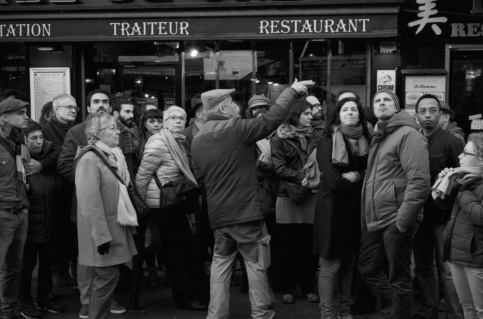 (We were reminded that Hemingway had far from the life of a starving artist when he was living there,  his income was substantial).

Of course, stories are hard to show in photographs. Jean-Manuel told us the tale of Calvin’s tower, which is in a courtyard near the Pantheon. Luckily, someone was going into the courtyard, and entering we could see this:

Apparently, Jean Calvin was on the run and managed to escape by climbing out the top window of this tower and fleeing across the rooftops..

Of course, after a day spent walking around Paris and seeing places where famous people lived, it was funny to see this sign: 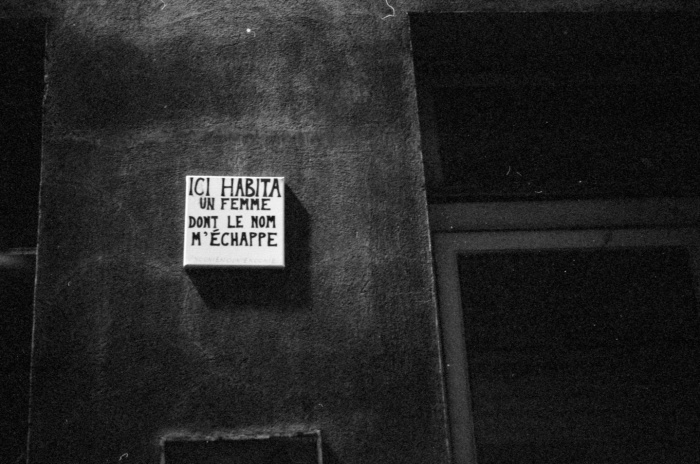 “Here lived a woman whose name I forget”

Now you could interpret that in any number of ways…

Last thing: this was the week that my friends Jean-Francois Dars and Anne Papillault published their short “film” about me and my research and also my photograph-taking, as part of their “Histoires courtes”. Jean-Francois is an excellent photographer, and you should really take a look.  Here’s the link as well as a direct link to the video if you don’t have flash. I guess this is the first 52 rolls post that was made into a film :-).

That’s it for this week. Next: California !