My last trip of the year: a week-long expedition to Pasadena. I had time to visit a few places before and after my meeting, and I’ve just finished scanning and developing all the film I took there together with a short trip I made to Marseille immediately afterwards. That’s 12 rolls in total (that brings me to almost 130 rolls for this year!); I’ll say it again, things were much simpler when we didn’t have to scan everything and could just make contact prints and leave it at that. Yes, I will be finishing my 52 rolls in a blast of Tri-X. You can see why Hollywood is in California: the light is wonderful. I’m going split up my posts roughly by place as it seems a shame to throw everything together.  Finally, thanks to Barbara M. (mombam) and others for suggestions of where to visit! I see I managed to hit most of them despite the very limited amount of time I had.

Actually the very first interesting thing that happened to me after I arrived was that I was invited to a friend’s house where a visiting Swedish chef was cooking for everyone! But I was too jet-lagged to take many pictures and those that I did take didn’t turn out very well. So, let’s go straight to downtown LA the next day.

First stop, Bradbury building and Grand Central market.  There was a nice atmosphere in the market, I had a good coffee there, which I certainly needed to get over my jet-lag. The Bradbury building, as most people reading this probably know, is one of those iconic LA structures which has featured in countless movies. From the outside it doesn’t look too special, but inside there are wonderful victorian balustrades and tiling. Unfortunately, there is a Subway sandwich shop in the ground floor, so a certain odour permeates the building … 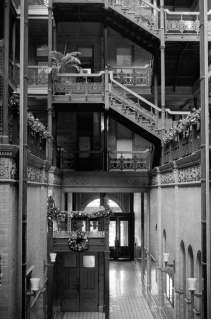 Next I went to see Hauser and Wirth, a warehouse converted to art-gallery, and afterwards had lunch in Little Tokyo. There was not a lot of people around, because it was only a day or so after thanksgiving. And yes, please film here! 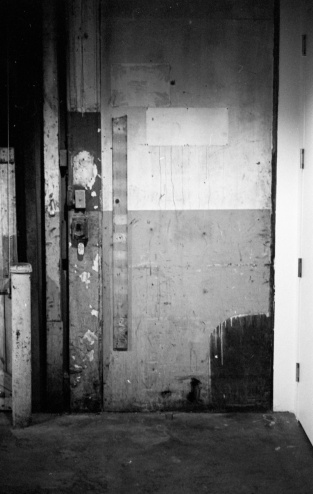 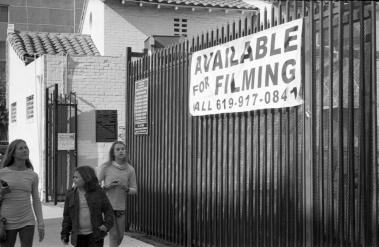 Next, the Geffen, where was a great Doug Aitken show, and next to which I found the “National center for Democracy”: closed for vacation (I guess :-)). That’s a telephone you see there on the left, illuminated.

Finally, Gehry’s Disney concert hall, and a view of downtown. Can you believe it, the weather was extremely bad the first few days I spent there: terrible rain…

Here are my other posts.