“Flowers laugh without uttering a sound. Roosters cry without shedding a tear. Examining the ages reveals that good deeds are as rare as flowers among rocky peaks while evil acts are as plentiful as the grass on fertile hills” – Kyokai

“High peaks and lofty crags are where the wise dwell. Green pines and deep valleys are where practitioners sojourn. When hungry, they eat tree fruits to satisfy their famished belly. When thirsty, they drink the flowing streams to quench their feeling of thirst” – Wonhyo

“The suddenly everything was like jazz: it happened in one insane second or so: I looked up and saw Japhy running down the mountain in huge twenty foot leaps, running, leaping, landing with a great drive of his booted heels, bouncing five feet or so, running, and then taking another long crazy yelling yodelaying sail down the side of the world and in that flash I realized it’s impossible to fall off mountains you fool…” – Kerouac

In my early 20s I fell off a building fracturing my heel in two places and breaking most of my toe bones while washing windows. Ironically, on the way to the hospital I heard Cleaning Windows come over the radio for the first time. During my recovery I recall voraciously reading books ranging from Kerouac’s Dharma Bums, and Gurdjieff’s Meetings with Remarkable Men to Harrer’s Seven Years in Tibet. There were many more but these stick out in my mind. It was nothing to spend a few hours in bookshops finding esoteric readings that captured my desire to be on a quest for knowledge and adventure.

Although unable to walk without the aid of crutches, going for hike in the bush with a friend, was not ever impeded. I quickly discovered that I was quickly able to glide along tracks by letting my upper body do the work and rhythmically swinging my legs forward when the crutches were placed on the ground in place of each step. After a trip to see waterfalls and a long hike up hills and down, on one occasion I drove back to Melbourne at breakneck speed to see the Dalai Lama give a speech. Little of what he said I remember, but recollect watching fascinated as he rolled a bangle backwards and forwards on a table while he was waiting to deliver his address. Afterwards I left slowly, the hall had emptied and I saw him standing on my path to the exit. I thought I might approach him, but didn’t. What would he think? What could I say? I was never one for icebreakers. It occurred to me as I looked at him, during that moment in time and space, that he had was wearing the shiniest, cleanest black shoes I had ever seen. Not like my scruffy shoes, jeans and crutches ready for climbing mountains.

Around this time a friend suggested I might want to visit a local yoga ashram with her. This was when she wasn’t studying to become an astrologer, doing Tai Chi or insisting we accompany her to psychic fairs. Although at first diffident, I later became interested and was always keen to learn more about other people, cultures and philosophies. At the ashram the food before the evening chanting was always inspired. In some ways it was almost both an anthropological and culinary investigation. At one point the guru visited from India, but even though I liked to keep my distance, I was happy to volunteer in the kitchen and elsewhere. Growing up, I had attended church, bible study and youth group, before moving away in early adulthood into other experiences and ideas. In some ways I felt a deep conflict between the values I had been taught as a youth, and some of the paths into Indian philosophy with their Brahmanic world view. One day after washing dishes, before the lunch meditation, chanting and meal I felt the need for some silence. I had been feeling troubled by an experience and needed to sit quietly by myself to collect my thoughts. I went out into the garden and found a place under a large tree. At that point the guru came through the garden on the way to the meditation hall, and scolded me for not being at chanting. I was told I needed to meditate more. It was intolerably scandalous. I was not were I was supposed to be and not following the routine. It felt like I had been pushed off a mountain.

Sometime afterwards I became unwell with severe headaches. After an appointment was made for me to see a physician, and some vague allegations were made by a family member including that the issue was due to my being vegetarian, I was asked how I felt. Funnily now in hindsight, although perhaps not for the confusion caused for the doctor, I replied very seriously that humanity was like a mountain and I had my place within it to find.

Time passes, I did not run away to India to become a sannyasa, but still climb mountains with many accumulated limps, and follow streams before they tumble down off our high local escarpment. During spring I look for rare wildflowers to photograph. In the heat of summer I find the shadows. Cool places to linger and bathe my aching legs. In the grottoes underneath waterfalls the only noise is the sound of water cascading and splashing as it reaches the rock hole below. For many years I have worked as an educator in prisons and assisted others in the education community through capacity building and organising, but that stream has left me like a river in the desert is emptied by drought or a change of course after it has left the mountains.

Tomorrow, I commence lectures in postgraduate Buddhist Studies at the Nan Tien Institute. From beneath past shadows I have become a vegetarian again and feel clean. Although this life force must inevitably come to an end, there is still time to pursue a thought and philosophy that has always called out to me to discover, learn, and is never too late to practise. And, once more I have been reading that old bhikkhu Kerouac, and tell myself “it’s impossible to fall off mountains you fool…” 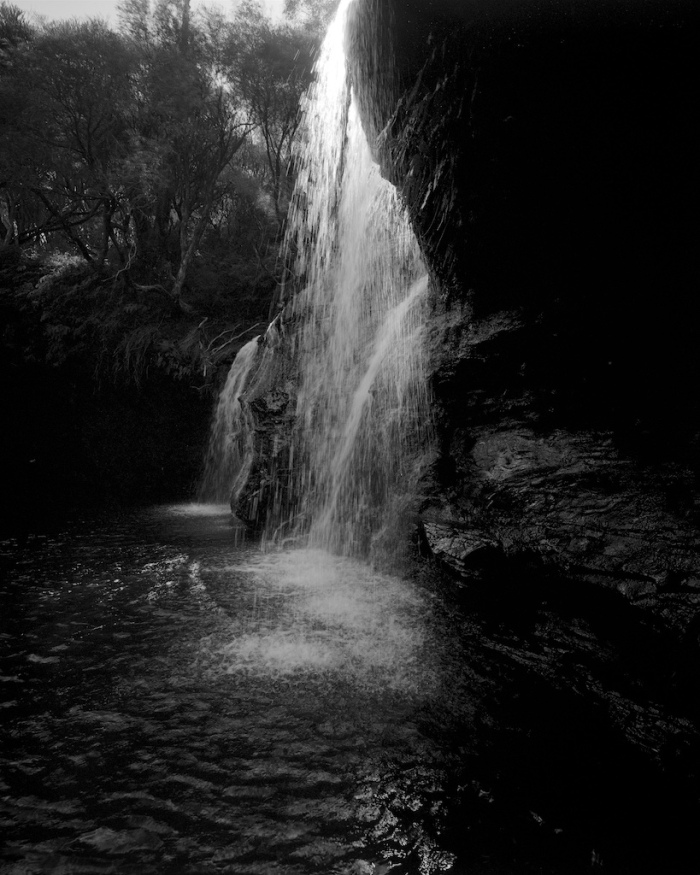 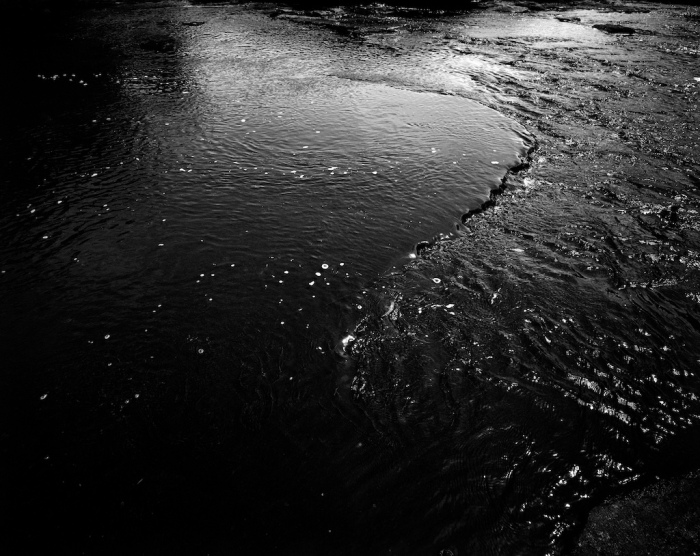 Falls before the precipice – Carrington Falls

All photos taken at Nellies Glen and Carrington Falls in Budderoo NP with a Chamonix 045F1, view camera, using a Rodenstock Grandagon-N 65mm lens, on Ilford FP4Plus and developed in PMK.

4 thoughts on “On mountains and falls”