I had/have a considerable backlog of undeveloped film. Last night I attempted to put a noticeable dent in it. My first four rolls, all 120 Kodak Tmax 400, almost came out perfectly. One of the four reels was miss loaded and I lost three shots in the middle of the roll where the film had stuck together. The other three came out perfect. I should have stopped there, but I loaded two rolls of Fuji Neopan Acros 100. The development time for 71 degrees was less than five minutes so I tried mixing the Clayton F76+ developer at the alternative concentration of 1:19 instead of the usual 1:9. The negatives that came out of the fix were extremely faint. There was just enough detail to see that they had actually been exposed. Hard to say were I messed up. I suspect I messed up the developer concentration, but it is also possible that my developer got contaminated. The problem may have been elsewhere since my fix had also suddenly turned a vibrant purple. So I decided to trash all of my chemistry and mix fresh fix, and on the chance my developer got contaminated I recleaned all of the lab ware.

Because of my this, I’m starting my 2017 posts with a print. This is a print for a book project I’ve been working on starting last fall. The theme is empty spaces. I’m looking for places that normally would be filled with people, but are empty when I photograph them. This is a night shot of a basket ball hoop in a local park.

This print made on Ilford polycontrast cool tone RC glossy paper. The digital scan of the negative is provided below for comparison. The print is higher contrast, a bit darker, and not as crisp. The print is also cropped a little tighter on the left. 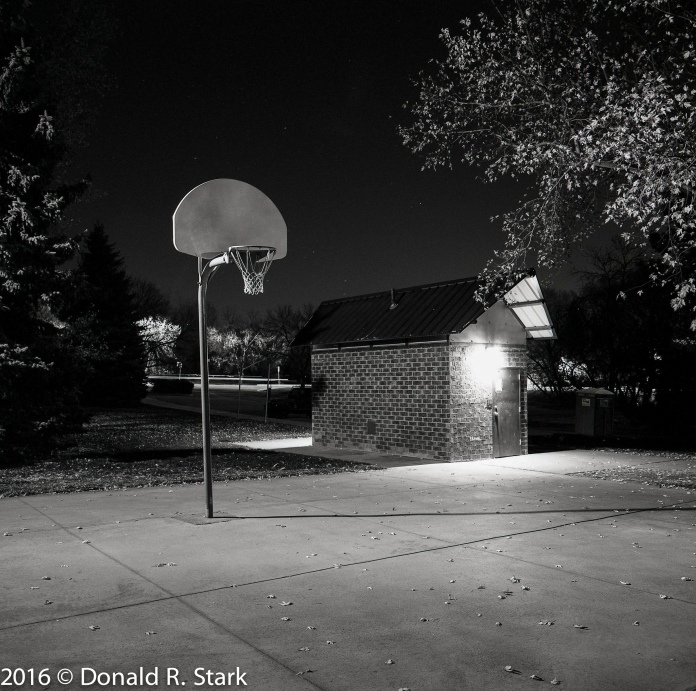 Not sure which one I like better. They are just different takes on the same scene.