I drove to the Sachuest Point Wildlife Refuge in Middletown intending to shoot some long exposures with motion.  I have never done this before.  Most of the motion shots were overexposed, I used an app to calculate the exposures.   The sea was very violent today with huge rolling waves.  On the featured image one can see the waves crashing onto a rock assemblage that of course I walked to.  As I lay on my back to take a low shot the ocean enveloped me.  I shook myself off and of course continued shooting with my point and shoot camera that thankfully did not suffer from the “dunkin'”.  I have color images from it on the southerly part of the shore that I hope come out well.  These shots were taken with my treasured Leica M3 and 50mm summicron lens using a yellow filter on the traditional shots and a 10 stop nd filter on the too-long exposures.   I was not using the Leica when I got lathered.  The film is wondrous Adox Silvermax 100, developed in Silvermax 1:29 for 11 minutes. 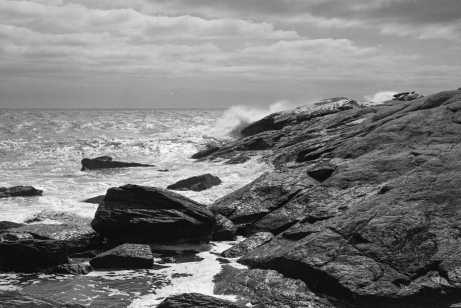 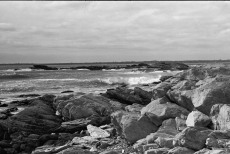