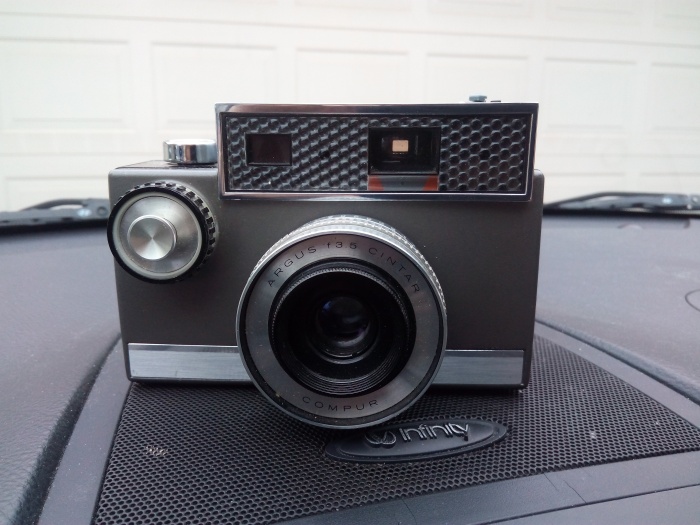 I can’t remember the last time I used the word ‘mundane’. It’s one of those terms that’s a part of our vocabulary but for most of us doesn’t float to the surface very often. The only reason I dusted it off and trotted it out is because it’s the only description that really seems to fit one of my thrift store finds this last week.
I often stop by the ARC store a few blocks from my office during my lunch break just to take a peek at the glass case in the back to see whether anything interesting has turned up. At first glance I didn’t see much that would pique my curiosity. One last sweep turned up an odd looking leather box with an attached strap in one corner next to a pile of DVDs. My ‘Spidey Sense’ started tingling and letting me know that unlikely as it was this had to be a camera.

When I picked it up I found that it was not only a camera but an exceptionally heavy and unusually homely, awkward and boxy camera. It’s a one of those things that only a mother could love. It makes an Argus C3 look downright stylish. It manages to out brick the brick. In fact it’s an Argus C3 disguised as an automatic exposure camera with an implementation that went terribly wrong.

I’ll admit that I have an affinity for unlovable technology and it went home with me. The Autronic 35 is a child of the 60’s. The Cold War was in full swing and Suburbia a reality with thousands of identical streets lined with identical boxy little houses that inspired folk singer Malvina Reynolds to pen the song that described them as “all made of ticky-tacky” and “all look just the same”. In Ann Arbor, Michigan the Argus Corporation was busy designing, building and selling hundreds of thousands of cameras that were unattractive and mundane but were also sturdy, inexpensive and capable of taking decent photos. From the late 1940’s through 1960’s these nearly indestructible little wonders introduced many thousands of Americans who could never afford a Leica to the joys of 35mm rangefinder photography.

One of my old friends told me that he still had hundreds of slides he’d taken with a C3 during the 60’s as he traveled not only all around the US but many places overseas.

As with every flea market/thrift store camera that I find this one deserved to be given the chance to open it’s eye and expose a roll of film and prove it’s mettle. I quickly found that even though the selenium cell meter was inoperative it was possible to manually set the aperture. There’s a chart in the manual that translates the odd Argus exposure numbering system into F-stops and the ‘flash/scene/action/500’ shutter markings into real speeds. The iso settings on the bottom of the lens only go to 200 but are basically worthless since the automatic exposure is kaput. I also found that there’s no stop for the film advance. After you snap a picture and advance the film once it’s easy to forget that you already wound it and do it again, leaving an empty frame in the middle of the roll. Double exposures are possible by flipping the rewind lever down on the bottom and cocking the shutter again with the film advance lever. The rangefinder is not bright but adequate and is set using the knob which surrounds the shutter release. I found the focus to be quite accurate.

I loaded it up with my usual Fujicolor Superia Xtra 400 and applied the Sunny 16 rule and started finding some unusual things to photograph. I work at a government facility and had no trouble at all finding some mundane, blocky and very 1960’s & 70’s buildings that would make ideal subjects.

The results were pleasing in an average way and I found that there are indeed ways of “Finding Beauty in the Mundane”. The Autronic 35 may not win any beauty contests but it’s OK in my book. Hope you enjoy my mundane photo collection. I’m not using that word again for a long, long time. 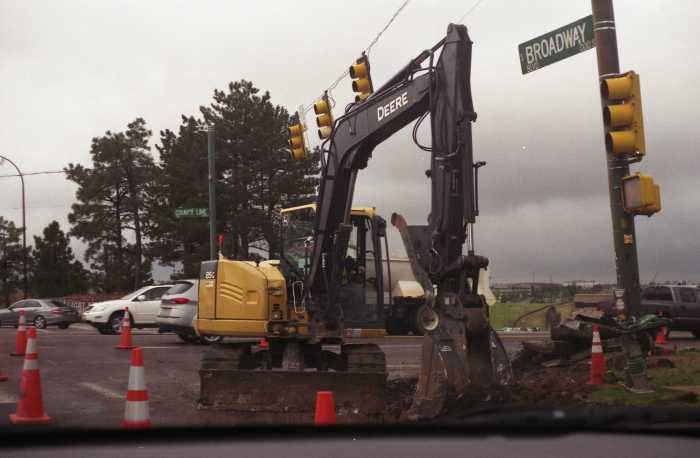 6 thoughts on “Week 14: Making the Most of the Mundane”