My first attempt at medium format was several years ago. I bought a Holga, shot and processed one roll, and hated it so much I gave it away. I’ve never been tempted to return to the dark side until this month. Facing a lengthy stay of my Pentax 67 at the rehab facility, I’ve been shooting only with the Isolette and the Diana. To my surprise, I have quite liked the results from the Diana. So I decided to give her less than lovely sister another chance. I bought a new 120N (which allegedly glows in the dark but I haven’t tested that feature) and loaded it with a roll of expired Portra 160, reasoning that even crappy results look better in color. These shots were part of my ongoing documentation of the weird and wonderful in my town. The top one was actually accepted into a gallery show featuring plastic cameras, of all the ironic things. None of my “good” stuff ever gets accepted. *sigh*

The pictured house is just a few blocks from my current home. It’s been gradually deteriorating for years, but there were still signs of life. Even an occasional rare sighting of the grizzled occupant sitting on the porch. But in about early March I spotted a tow truck taking away the pickup that always sat in the driveway. Then a few days later a small UHaul pulled up and took away some boxes. Now the place is completely abandoned but certainly not cleaned up. I wish I were braver I would go in close and peek inside.

The next one  is another example of the constant remodeling or razing of homes throughout my little part of town.

The next photo is an example of why I think I can learn to love this little Holga. Unexpected crazy beautiful. 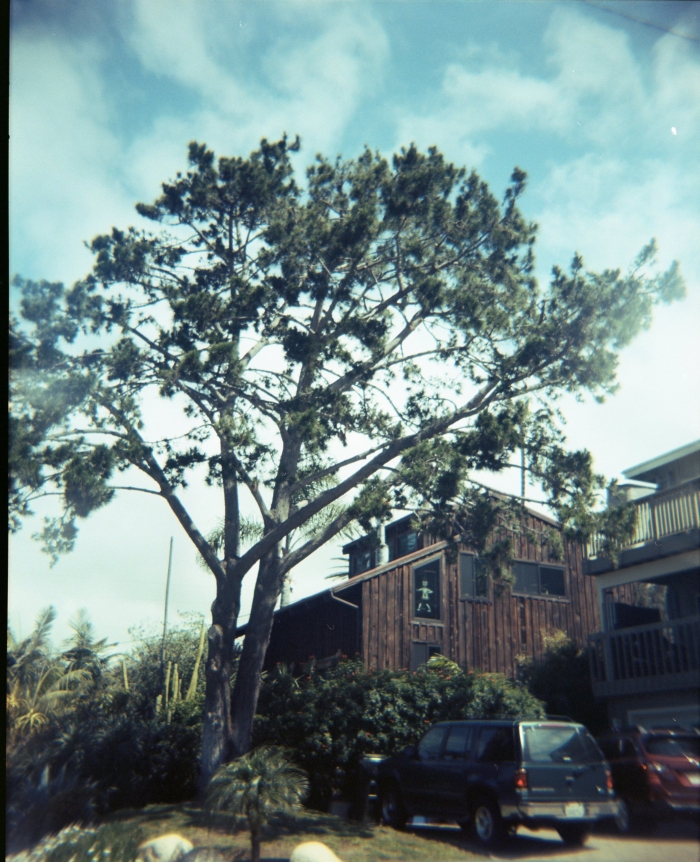 I may have already posted some photos of the Wizard of Oz sculptures, and you can expect more because they are fascinating. Also hard to photograph because they are in shade most of the day. Sorry for the lousy scans.

Finally, just up the road at the corner of the street these amazing beings are on, I found something that clearly looks like a horror movie going somewhere to happen.

So I am waaaay behind on my postings, and also currently in a photo funk, shooting nothing for over a month. Luckily I have enough backlog to work on that I can shoot some more in the meantime and still make my 52 rolls.

6 thoughts on “Roll 11 The Return of the Dreaded Holga”