This roll was shot on the Diana, which is becoming a favorite despite its primitive nature. I spent a fortune to have my precious Pentax 67 returned to life but just haven’t taken it out. Mostly the opportunities I’ve had to shoot are on quick walks, or dashing out of my double parked car to get a quick image. The Diana is also easy to travel with, as I discovered in later rolls.

The first two images are of a house about a block from where I am now living. It appears to be abandoned, but every once in a while something changes which leads me to believe perhaps someone is watching over it.

The next few were taken in the alley behind this house. All the streets in this part of our town have alleys which are a source of endless fascination.  This is where the illegally converted garages, crazy construction projects and all manner of weird stuff hang out. It never ceases to surprise me that these things are often mere feet away from multi million dollar homes. What a crazy neighborhood.

These homes are a different kind of crazy. They are fairly well known kitsch and can be read about on numerous blogs if you care to. They are in downtown Encinitas. They’re known collectively as the boat houses although they aren’t really boats. They were built as dwelling units that look like boats (who knows why?) by some retired engineer in the 1920s. One of the cool things about them is they were buit from repurposed wood from demolished structures. They are currently owned by the local Preservation Society and being rented as apartments 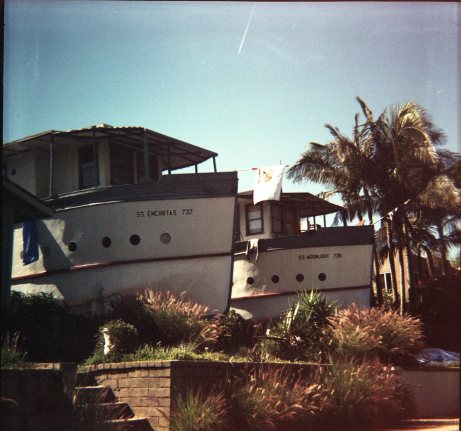 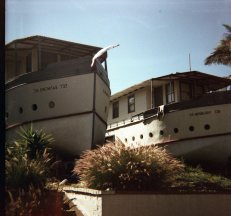 This is the tiny American Legion post a few blocks away from the boats. As you can see, they had their fancy BBQ set up next to the dumpster.

And this is what passes for dwelling units in these parts where rents are insanely high even for illegal rundown converted garages.

I find myself inserting a lot of social commentary with these images The more I explore my town the more puzzling/disturbing/downright inexpicable things I find.