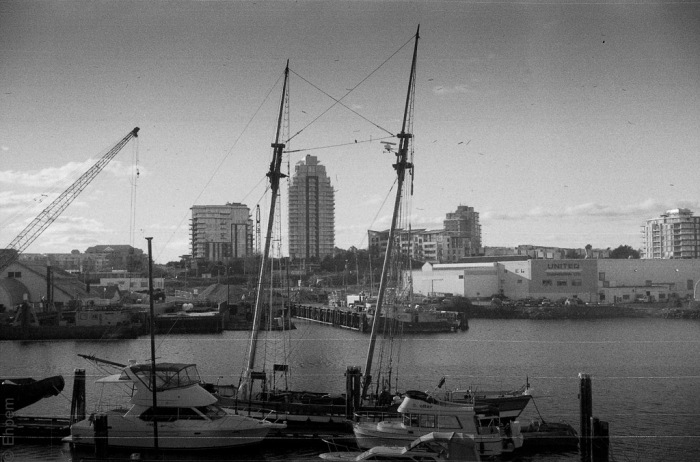 This roll of Kodak Plus-X Pan which expired in 1979 came to me via a giveaway draw at Utah Film Photography. Check out Shaun Nelson’s post for more and better images from the bulk roll. And while you are at his website, have a look around at a lot of other great film photography.

In my response to the giveaway I said I would shoot the film in an Olympus XA2. However, I found that the film was a bit tight in the very cool vintage cassette it had been loaded into and would not pull through in the XA2 which only has one set of teeth for the sprocket holes and they were slipping. So, I reloaded the film into a Yashica Electro 35 GS, a robust rangefinder from the early 1970s with an excellent lens. I took Shaun’s advice and metered it at ISO 100.

I first loaded the film just before Christmas but only took three or four shots as Shaun had suggested I would want good light for the film to perform well. Good light has been hard to sync with my schedule. As the GS was a bit big to always have with me, it took quite a while to get to the end of the roll, which I did last week. Here then are the images.

I think that the old cassette was a bit beyond its useful life. The film is scratched for the length, which accords with it being quite tight to wind on and one instance of partial double exposure. Also, there are a lot of short threads that have got onto the film when it was being exposed (the black marks on many of these images) and these surely are from the light trap fabric on the cassette which seems a bit fragile. A few light leaks occur on the first 4 or 5 frames which I think are related to swapping the film from the XA2 to GS. Even with these flaws, I really like the look and feel of this film. I am truly amazed that it came out so well 37 years after expiry and presumably close to 40 years after manufacture. Thank you Shaun for the opportunity to shoot some of this film, it was a real treat.

I made neutral scans with an Epson V700 then adjusted black, shadow and highlights levels in Lightroom to get back to a more normal look. I spotted the dust and cropped away the frame edges where my scan had captured them. No other changes were made except to the double exposure which I used a graduated filter to balance out the two quite different exposures – you will see exactly where that “graduated” filter stopped as a fine white line – I could not get it aligned perfectly. I will probably finish the edits by removing the scratches from a couple of images that I like the best. Also, I will re-condition the cassette and set it aside to use with bulk film when I get that going in the future (I do have a loader, just need to settle on a film I like enough to shoot so much of it). 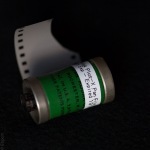